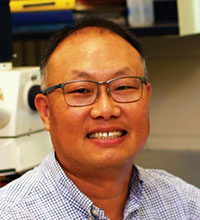 The two broad areas of work in our laboratory are (1) functional genomics studies of arthropod vectors of human pathogens and (2) diapause research on West Nile Virus vector, especially the mosquito Culex pipiens, which is the primary vector for West Nile encephalitis, Eastern equine encephalitis, and many arboviruses, as well as lymphatic filariases. In particular, filarial nematodes have been infected over 120 million, over 40 million of them are seriously disfigured by the disease. One-third of the people infected with the disease live in India, one third are in Africa and most of the remainder is in South Asia, the Pacific and the Americas.

One of conspicuous void in our understanding of vector biology is how mosquitoes and other disease vectors regulate their seasonal development. Within the temperate zones, mosquitoes limited temporally to just a few months of active development. The remaining months are spent in a dormancy period known as diapause. Thus we are interested in determining the molecular mechanisms by which gene products exert this alternative developmental pathway. An applied aspect of this work is the potential utilization of this phenotype to discover novel developmental and metabolic inhibitors of arthropod vectors of human pathogens.

Sim, C. and Denlinger, DL. 2009. A shut-down in expression of an insulin-like peptide, ILP-1, halts ovarian maturation during the overwintering diapause of the mosquito Culex pipiens. Insect Molecular Biology, 18: 325-32.