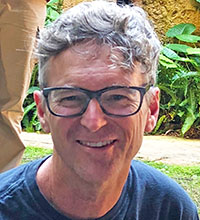 Modulatory peptide discovery and biotechnology
We discover and develop novel peptides for low-cost, large-scale applications.  We are especially interested in peptides and delivery systems that can solve Third-World problems.

Mosquitocidal nectar plants
Male mosquitoes feed exclusively on nectar while female mosquitoes need nectar to fuel their blood quest flights. Leveraging this biology, the Kearney Lab is developing a system to deliver mosquito-specific peptide toxins produced in nectar for imbibition by mosquitoes. In this way, the mosquitoes travel to the nectar to receive a dose of toxin that kills only mosquitoes. In contrast, pesticides kill a wide array of insects and must be sprayed in sufficient volume to reach all mosquitoes, since pesticides kill by direct contact. We have identified Impatiens walleriana as a plant which is highly attractive to mosquitoes and is easily transformed genetically (Chen and Kearney, 2015). Impatiens are the top selling flowering shade plant world-wide. We are testing the attractiveness of mosquitoes to impatiens in simulated outdoor garden settings on-site in Florida, Mississippi and Texas in work funded by the BF Smith Foundation. In preparation for producing transgenic, mosquitocidal impatiens, we have developed a targeted peptide which specifically kills Aedes mosquitoes. We are now inserting the genetic sequence of the targeted peptide into the impatiens genome, to be expressed specifically in nectar, using an efficient Agrobacterium-based protocol.

Biocomputing approaches to discover antimicrobial peptides and other modulatory peptides
Small, cysteine-stabilized peptides are very sturdy little proteins and are extremely abundant in Nature. They are used by snakes and bees as venoms against mammals, by spiders and scorpions to immobilize insects, and by humans and plants to protect against disease-causing microbes. If delivered in an innovative way (such as via nectar!), an insecticidal peptide could replace pesticides. The same can be said for antimicrobial peptides replacing antibiotics. The most common form of cysteine stabilized peptides has a bonding pattern of cys1-cys4, cys2-cys5, cys3-cys6 at its core. We have named these sequential tri-disulfide peptides or STPs (Islam et al., 2018b). In collaboration with Dr. Erich Baker (Baylor Computer Sciences), we have developed computer algorithms that can scan through genomic databases and predict whether a DNA sequence would code for an STP (Islam et al., 2015). Furthermore, we can predict the functional category of the STP, distinguishing, for example, between antimicrobial, calcium channel blocking or acetylcholine receptor inhibitor peptides (Islam et al., 2018a).

Plant produced nanoparticle vaccines
For Third World applications, a vaccine must be inexpensive to produce, preferably produced in Biosafety Level 1 (BSL1) conditions to further reduce costs, and stable even without cold storage. In collaboration with Alison McCormick of Touro University, California, we have produced 300 nm nanoparticle vaccines in plants in BSL1 conditions in a project funded by the Gates Foundation.  These nanoparticles comprise an inner RNA core, which can replicate in human or plant cells, and a highly protective outer protein coat. They are avidly taken up by dendritic cells, the main antigen presenting cell of the human immune system. The RNA used is modified from Flock House virus, an insect virus, and the coat consists of Tobacco mosaic virus coat protein.  The genes encoding these are delivered by agroinoculation to the chromosomes of intact plants, and the leaves are then harvested for nanoparticle purification a week later (Zhou et al., 2015). We have improved the nanoparticle yield by redirecting a portion of the nanoparticle assembly to the endoplasmic reticulum as well as the mitochondria (Zhou and Kearney, 2017). This technology is now ready for commercial development.